Remedy Wheel at the Fair: Amelia Earhart & the Dymaxion Futurecar 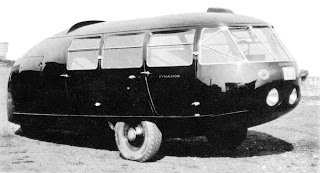 An entertaining part of writing REMEDY WHEEL was discovering all the bizarre, futuristic electronics and vehicles which made their debut during the "big show by the lake," the 1933-34 World's Fair in Chicago.  The Dymaxion Car was designed to negotiate the narrow lanes and limited parking areas in newly congested cities. Part of the message of the Fair, of course, was that economic recovery was so assured that soon everyone would have a car, and such problems as parking would become universal. Prosperity was right around the corner. Designed by archietct and inventor Buckminster Fuller, the sleek, bullet car looked much like the airborne "pods" of the Skyride which lifted passengers back and forth above the lagoon, a perch from which they could see four states.

Here's a quick description from Wikipedia: "The Dymaxion car was a three wheeler, steered by a single rear wheel, and could do a U-turn in its own length. However, the rear-wheel steering made the car somewhat counterintuitive to operate, especially in crosswind situations. The body was teardrop-shaped, and naturally aerodynamically efficient. The car was twice as long as a conventional automobile, at 20 feet (6.1 m) long.[4] Drive power was provided by a rear-mounted Ford V8 engine, (See: RF →) which produced 85 brake horsepower (63 kW; 86 PS) through the front wheels. The front axle was also a Ford component, being the rear axle of a contemporary Ford roadster turned upside-down."

Even Amelia Earhart, who made a surprise landing in Lake Michigan during the Fair, took a joyride in the Dymaxion. You can see her in the backseat during this video clip. Luckily she wasn't onboard when the Dymaxion suffered a fatal accident during a later exhibition. The prototype flipped over, rolled a few times, and killed the driver. Investors quickly lost interest.


Earhart fans should check out my friend Micah Ling's beautiful poetry collection, Three Islands, which revolves around the enigmatic figures of Earhart, Fletcher Christian and Robert Stroud.
Posted by Amos Magliocco at 7:28 PM