Hello, high lonesome blog. I've linked to my most recent short story publication, not so recent anymore since it's from last year, but now available for clicking on the left side of this page. The story is called "Saturday Children" and appeared in the great Redivider's Spring 2011 issue. Thanks!

PS: I don't know why it opens to the last page or why it's 10mb in size. The creation of PDFs has always been a mystery to me.
Posted by Amos Magliocco at 3:14 PM

At the coffee shop this morning, my friend Eve, a barista there, noticed the crickets at the front of the shop near the door were making a terrible racket. She was right; the loudest insect was only a few feet from my corner table, in fact. But I hadn't heard it, somehow, until she pointed it out. Now the thing sounded as if it had found a megaphone.


While Eve lunged for the crickets between potted plants on the windowsill, I thought about how ambient noise in a place like that is often exactly what I need to concentrate. Maybe that portion of the 'chattering mind' that otherwise distracts me during a writing session finds itself distracted by the sounds and sights of a public cafe.


I don't worry so much about teasing out how or why certain locations promote productive writing sessions. I just go where the momentum is and move when it leaves. I don't ask questions. This morning I settled into a groove after two hours' scratching around, and found the elusive entrance to the scene I was writing about the same time as Eve trapped the last of her cricket tormentors in a paper cup and set it loose on Hickory Street.
Posted by Amos Magliocco at 3:07 PM 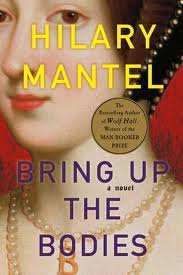 My review of Hillary Mantel's newest, BRING UP THE BODIES (current finalist for the Man Booker Prize) went live on Ringside Review's Bookpunch (famous for their reviews in 200 words) today. Read it here.
Posted by Amos Magliocco at 12:12 PM

Hi, blog. I didn't win the Amazon contest, as you might have guessed, and then I retreated to a mountain cave for over a year to meditate on the poisonous influence of Amazon on literary art.

No, none of that.

I had started a new book even before last year's Amazon news and the slight stir of agent interest that followed. The new book is now a nearly-complete first draft, which sounds great--and it is--but it's also the equivalent of forging the granite block you intend to chisel into some appealing shape. Can't start without the block. Can't rush the chiseling. In other words, there's a very long way to go. I can't imagine this novel will be ready even for my loyal cat to peruse for another year.

I will recommit to small, almost Twitter like updates to this blog. I can post about the oddities of the novelizing habit and some sense of the story's context. I don't want to write about the story, though, not because I think you'll steal it, dear sleepy blog, but because I'm superstitious about how many times you can tell or write about a story that isn't finished or even fully imagined yet.

Long entries in this space are probably counterproductive since they might make think I've actually accomplished something at the keyboard.

The new novel is set in London between the summer of 1909 and late 1910, and also partially in Wahoo, Nebraska. The main characters are a young American couple who get caught up in an obsession that takes them far from home and even farther from who they thought their lives would make them.

The story has nothing to do with the weather, but metaphorically it is finally the "stormchasing novel" my friends have suggested for years that I should write.
Posted by Amos Magliocco at 1:35 PM