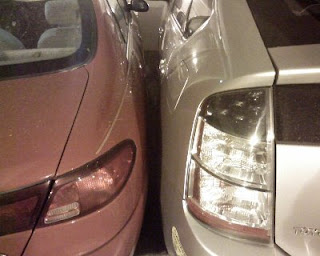 Yesterday someone parked about six inches from my driver's side door. I found this after I finished teaching my morning class, outside a building some distance from where I teach next, and I'm accustomed to grabbing some lunch between the classes and then parking again much closer to where I spend the balance of my day. When I saw the other car, I knew it was tight, but I thought the opening was wide enough that I could squeeze inside without much trouble. At least that might have been the case fifteen years ago.

After three tries to wedge myself between the door and the frame, I backed out and decided the umbrella I was holding (due to the tropical nature of North Texas weather this fall) was preventing me from contorting successfully enough to negotiate the gap. I threw it in the backseat and was soaked seconds later, and still fared no better jamming myself into the car. Now I was really pissed.

You see, in less than two hours, I was scheduled to be observed by another faculty member. These evaluation sessions happen once a year and I was acutely conscious of this as I noted my drenched shirt and slacks and the odd scuff marks under my belt from where I'd rubbed against some part of the door. In another few minutes I would spot a strange red dye smeared above my right knee, from what I have no idea.

When I was convinced I couldn't get, I retrieved the umbrella and stood by my car a moment considering the options. I could wait, of course, and hope the obnoxious Chrysler owner showed himself, but that might have been counterproductive since nothing came to mind to say that wasn't composed entirely of the most vulgar profanities I could imagine. It was likely a colleague from another department--we were both in faculty/staff parking spaces. I imagined a trip to the Dean's office. Disciplinary committees. The disappointed puzzlement of my department chair.

Of course the best choice would have been to gather my things and start the modest walk to my next destination. But I like to hit the drive-through of our locally famous Asian-fusion joint, Mr. Chopsticks, and grab a shrimp fried rice or cashew tofu for lunch between classes. I teach four classes on Thursdays, capped by a three-hour night class, and it's hard enough staying energized without skipping a meal. On the day I was scheduled for evaluation, it seemed even more important to stick to my routine, rude driver or not. At last I climbed in the passenger seat and studied the problem of sliding over to the driver's side, no small task in my 4Runner. I have a laptop computer stand, part of the permanently-installed storm chasing paraphernalia, not to mention Toyota's abnormally high center console--both significant obstacles.

I thought of starting the car and putting it in reverse, with my left foot or even my hand on the brake pedal, to back away from the offending car, but thought better of operating a vehicle in a way I was familiar with from only my weirdest, most panicked nightmares. They never seem to turn out very well.

So I tried to make the leap from one side to the other. My first try was a complete failure, I found it impossible to swing my legs around the main pole of the Jotto Desk. So I removed the upper portion of the stand and threw it in the back. My next attempt was almost successful, but the lid of the console felt as if it was about to snap, so I aborted the effort and removed the lid, throwing it in the backseat as well. On my last try, with my butt sliding across the now open console, I realized that what was likely to happen--what seemed almost certain given the importance of the day and the already comical nature of my predicament--was that my pants would catch on the exposed hinge of the console and tear the ass right off. I stopped moving and considered what I could do to stop this, but at the same time I was calculating the distance to my house, how long it would take to change clothes entirely and return to campus. I slid another inch, two more, three, and then plopped down in the driver's seat, pants scuffed and soaked but intact.

In triumph I called Mr. Chopsticks and ordered my stir-fry veggies in advance. Back on campus I ate lunch in front of the oscillating fan in my office, drying out and calming down. What a week.
Posted by Amos Magliocco at 10:00 PM

big success on her first try

Friend of a friend Alice Miller saw her first published short story, "The Windmill," awarded New Zealand's prestigious BNZ Katherine Mansfield competition, with a $10,000 prize. The story treats the love affair between a young composer and her imaginative but intense partner, and the choices they make to preserve their separate futures. Miller says,  "It's a story about admiration, about what happens when you meet someone say with an amazing imagination and that's incredibly enchanting and can make you giddy, but can also threaten to take you over."


Here's a video report from a national station in New Zealand, and various print reports regarding the celebrated award. Thanks to Jeff Doty, who attended Iowa at the same time as Miller and remains a close friend, for pointing out the news.

A very generous piece about my Pushcart essay, "Put on the Petty," and my novel-seeking-a-home, Remedy Wheel, by  Cynthia Shearer, author of The Wonder Book of the Air and The Celestial Jukebox, which appeared first on her fine blog, Thimblewicket, and then under the Literature tab of Oxford American Online.

Thanks, Cynthia, for the kind words!
Posted by Amos Magliocco at 4:17 PM 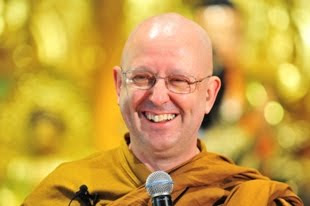 For fans of  Ajahn Brahm, the funny and quirky storytelling monk has returned from a three-month retreat and posted a new talk entitled, "Why Me?" about the calamities life can offer.
Posted by Amos Magliocco at 5:24 PM

A student of mine, Frisco Edwards, landed his first publication this morning, a story called "Escape Hatch," in the online journal Denver Syntax. First pubs are always memorable events, so congratulations to Frisco!
Posted by Amos Magliocco at 2:57 PM